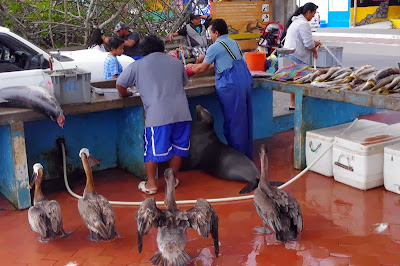 Landing: Dry
Video from Puerto Ayora
and from the Fish Market.

After breakfast we went into Puerto Ayora is the largest town in the Galapagos.

Here we first visited the Darwin Centre (see other blog) and then we went for a walk in the city - the most interesting seeing was the local fish market, where the fishermen just had landed the  catch of the day and was cleaning the fish - sea lions, frigate birds and pelicans were fighting for the remains, and fishermen had a hard time keeping sea lions and the large birds away from the fish - a fun experience - late morning we went back to the ship for lunch. 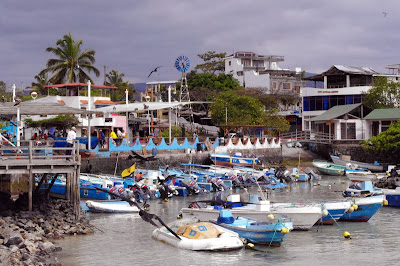 Santa Cruz Island is situated in the centre of the archipelago with an area of 986 kilometres squared and a maximum altitude of 864 metres. It is a large island with a variety of geology, wildlife and vegetation, all of the Galapagos life zones are present on Santa Cruz. Santa Cruz Canton is the second largest island after Isabela. Its capital is Puerto Ayora, the most populated urban centre in the Galapagos Islands.

Santa Cruz is named after the Holy Cross, its English name (Indefatigable) was given after a British vessel (HMS Indefatigable).

Puerto Ayora
Santa Cruz hosts the largest human population in the archipelago at the town of Puerto Ayora, a port city located along Academy Bay on Santa Cruz Island, with more than 12,000 inhabitants, the largest city in the Galapagos. The city is home to the National Park Tortoise Breeding Center and the Charles Darwin Research Station and a center of tourism in the islands. There are many trips from Puerto Ayora to the different islands in the Galapagos.

Posted by Mogens Hallas at 1:00 AM