After hunting the whales (see other blog) we did sail along the coast where we saw  Galapagos Penguins, Blue footed Boobies, nesting Pelicans and the  Flightless Cormorants.
After a dry landing on the rocks we did a strenous hike up the side of a volcanic tuff cone to the wondrous view of Darwin's Lake, a perfectly round saltwater crater. Resting Sea Lions, Finches and Mockingbirds.
I was surprised by the more recent graffiti. Unfortunately - many of the old ships and even some more recent ships have left their marks with maritime graffiti along the walls. The graffiti at the walls is banned today - but the historical graffiti remains a tourist attraction, but even some of the historical artifacts are not always pleasant to watch. 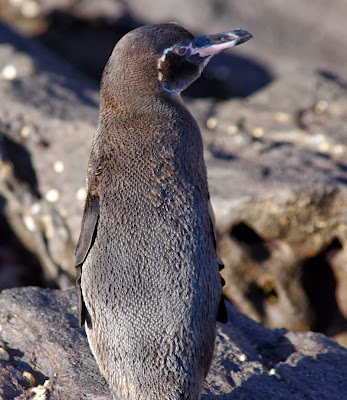 Galapagos Penguin
The Galapagos Penguin (Spheniscus mendiculus) is a penguin endemic to the Galapagos Islands. It is the only penguin that lives north of the equator in the wild. It can survive due to the cool temperatures resulting from the Humboldt Current and cool waters from great depths brought up by the Cromwell Current. The Galapagos Penguin is one of the banded penguins, the other species of which live mostly on the coasts of Africa and mainland South America. The average Galapagos Penguin is 49 centimetres (19 in) long and 2.5 kilograms (5.5 lb) in weight. It is the second smallest species of penguin. They have a black head with a white border running from behind the eye, around the black ear-coverts and chin, to join on the throat.

The Galapagos Penguin occurs primarily on Fernandina Island and the west coast of Isabela Island, but small populations are scattered on other islands in the Galapagos archipelago. 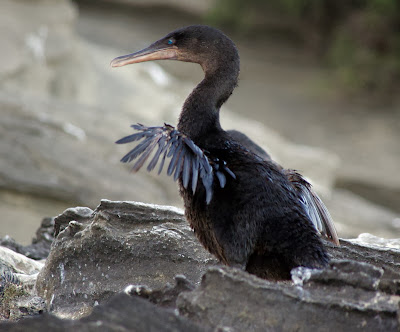 Flightless cormorants (Phalacrocorax harrisi), also known as the Galapagos Cormorant, is a cormorant native to the Galapagos Islands, and an example of the highly unusual fauna there. It is unique in that it is the only cormorant that has lost the ability to fly. Like all cormorants, this bird has webbed feet and powerful legs that propel it through ocean waters as it seeks its prey of fish, eels, small octopuses, and other small creatures. They feed near the sea floor and no more than 100m offshore.

The Flightless Cormorant is the largest extant member of its family, 89–100 cm (35–40 in) in length and weighing 2.5–5.0 kg (5.5-11 lbs), and its wings are about one-third the size that would be required for a bird of its proportions to fly. The keel on the breastbone, where birds attach the large muscles needed for flight, is also greatly reduced.


Tagus Cove:
It is a beautifully well protected cove sheltered by the shoulders of two volcanic craters and has been used as an anchorage for over 300 years. Arriving here the boat will sail through the Bolivar Channel,  these are the coldest most productive waters in the Galapagos,

Tagus Cove, named for the British naval vessel that moored here in 1814, was used historically as an anchorage for pirates and whalers. The coves quiet waters make for an ideal panga ride beneath its sheltered cliffs, where blue-fotted boobies, brown noddies, pelicans and noddy terns make their nests, and flightless cormorants and penguins inhabit the lava ledges.
From the shore, a wooden stairway rises to the dusty trail passing through the Palo Santo Forests to reach the  perfectly round saltwater crater, Darwin Lake.

Posted by Mogens Hallas at 5:00 PM